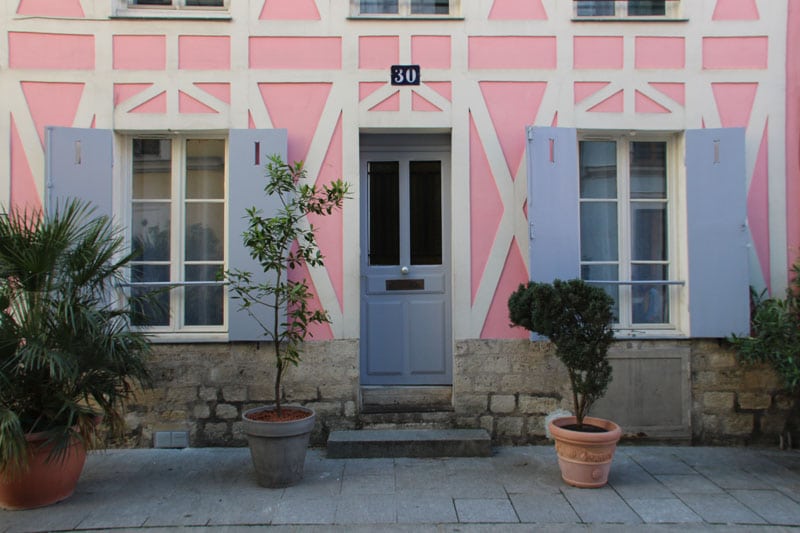 For generations, French shutters have been used to protect from the elements and provide beautiful color on the exterior of homes and buildings. This collection of photos will inspire and inform about all elements of French shutters, or locally called volets. French shutters do not just add to the beauty of the architecture, but are actually practical. Residents actually close the shutters for privacy, light reduction and insulation.

This home epitomizes the colorful use of shutters in French homes. The pink building is a statement on its own, and the lavender shutters and door make it such a joyful place to enter. These French shutters are flat panels with operable hardware to close and provide privacy when necessary. The rectangular cutouts at the top echo the shape of the door and the row house itself, while the white trim gives movement with the angular shapes it provides.

This image is a perfect example of the juxtaposition of modern and historical present throughout Paris. The pre-War building on the right is a great example of louvered French shutters providing the classic style necessary for this stately building. The modern building on the left gives a perfect pop of color around the windows and light with the mirrored glass on the side. This building has a totally different type of French shutter, with exterior sections able to accordion fold open or close over the window openings.

The rustic nature of these flat panel shutters allows the colors of the surrounding buildings to take center focus. The slight eyebrow at the top of the window is mirrored by the arch in the shutters, allowing them to fully close if necessary. The star cut-outs give a little visual interest to what is otherwise a very flat plane of wood. And the greenery in front of the window adds to the natural allure of this home.

This entire street is filled with gorgeous color combinations on homes, doors and outside shutters. One of the most striking is this white home with bright blue accents. The door’s horizontal flat panel design complements the vertical panels on the shutters, and the wrought-iron window box elements continue the geometric pattern. The rectangular cut-outs on the blue shutters offer the final personalization to this exterior design.

This butter yellow home is nicely accented with kelly green shutters and front door. The board and batten shutters have an interesting pull detail in the upper section to more easily grasp and close the functional shutters from inside. While difficult to see in this photo, these farmhouse shutters also make use of another unique hardware detail: the shutter tieback featuring a woman’s face. The olive trees in bright blue planters finish off the appealing entrance to this home.

So many of the buildings in France are mixed use: stores on the street level and homes or offices above. This building uses shutters on just the second level, where there is a small porch are outside each window. The divider rail locations on these exterior shutters demonstrate their age. The two on the right seem to have been replaced after more modern windows were installed. However, the three on the left have two divider rails in locations that must have matched with older windows with transoms at the top.

This is another row house, demonstrating a unique color scheme and casual entrance with a variety of potted plants. The paneled door in a dark navy color really stands out next to the white trim and light blue body of the building. The wooden shutters are shown in open and closed position, demonstrating the versatility of movable panels. These simple white shutters with diamond cut-outs have obviously been valuable to the function of this home for many years.

The longevity of quality wood shutters is obvious in this example. The aged blue louvered shutters shown here could benefit from a fresh coat of paint, but they are structurally intact and ready for many more years of service. These exterior French country shutters cover more than half of the window but still allow room for the wrought iron feature at the bottom of the window.

The use of exterior shutters is France is reflected in other parts of the world. A great example of this French influence can be found in the adaptation of New Orleans shutters and architecture in the United States.

It’s encouraging to see how many different styles and finishes of French shutters are represented today. This collection of photos shows a variety of ways to incorporate shutters into almost any home exterior for a long-lasting improvement. 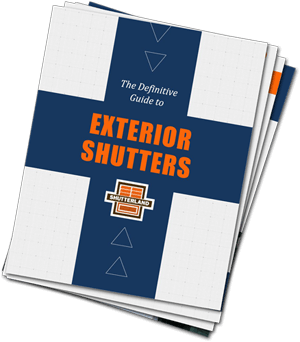